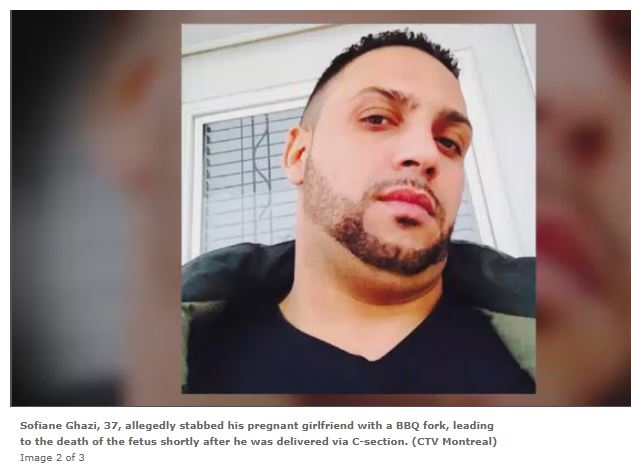 A man accused of stabbing his eight-month pregnant wife multiple times with a BBQ fork in the belly resulting in the death of the fetus will face first-degree murder charges.

Sofiane Ghazi, 37, will face seven other counts, including attempted murder on his girlfriend, uttering death threats, armed robbery and three of breaking his conditions. He appeared via video conference Tuesday afternoon.

Ghazi did not enter a plea. He remains behind bars pending his next court date on Aug. 25. In the meantime, he is forbidden from contacting his wife or children, even through a third party.

The suspect’s 33-year-old wife Raja Ghazi was stabbed in the early hours of Monday morning just hours after police had visited the home apartment on Langelier Blvd. near Pascal St. in Montreal North to respond to a call about a domestic dispute.

“The woman was conscious when Urgences Santé arrived, but the urgency was to get her to hospital.”
The pregnant woman was rushed to an operating room and the baby was successfully delivered via C-section, but the infant died later in the morning.

Police confirmed with CTV Montreal that the child, a boy, was alive at the time of delivery. He died shortly after.
Ghazi was not at home when police arrived, but was arrested late Monday morning after police spotted his car in the neighbourhood.

The woman is expected to survive her injuries, police said.
Canadian law considers fetuses inside the womb not legal victims, however, according to the Criminal Code, the definition hinges on whether the child was likely to be born alive. Injuries notwithstanding, if the fetus was viable, it would qualify it to be considered a human being, explained defence lawyer Andrew Barbacki.

“The definition in the Criminal Code says that a child becomes a human being when it is completely outside the mother’s body, whether or not the umbilical cord is severed, whether it breathes and whether it has independent circulation. When it proceeds outside the body, hypothetically, it is perceived as alive,” he said.
The medical facts of this case played a role in the charges.

Prosecutor Anne Aube said a person can be charged with a homicide by causing injury to a child before or during its birth, which results in the child’s death after becoming a human being.

In laying a homicide charge, prosecutors were guided by Sec. 223 of the Criminal Code which outlines when a baby is considered a human being.

“There are different criteria to (being considered) a human being, but essentially it’s to be alive,” Aube told reporters.
Aube says the Crown consulted jurisprudence — none exactly similar to the case currently before the courts — before proceeding with the charge.